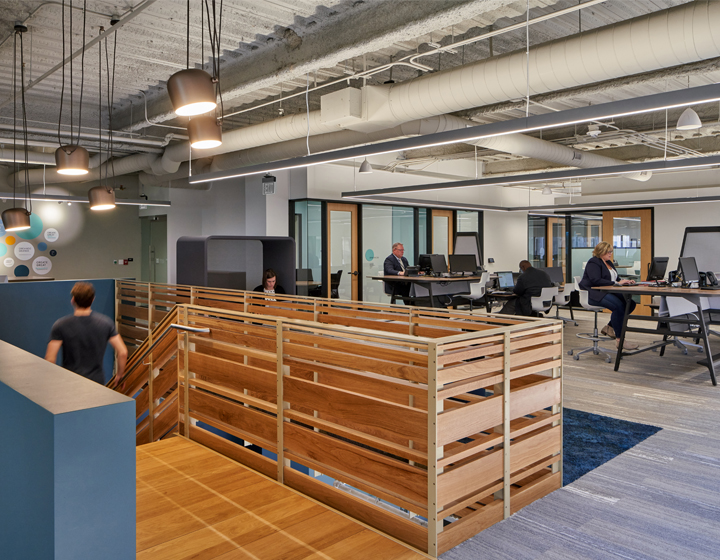 Open Offices are a Business Strategy, Not a Best Practice

Will COVID-19 be the end of the open office? It’s a question we’ve heard a lot over the past couple of weeks. Workplace design team members Melissa Malburg and Derek Molenaar explore why that’s not the question we should be asking.

Twenty to thirty years ago, offices were smack dab in the middle of what we in the design industry have dubbed “Dilbertville.” Much like we see in the cartoon, “Dilbertville” is an office filled with maze-like cubicles. For the most part, people hated them. And in response, the open work environment was born. Wifi, mobile technology, and rising real estate costs have all played a hand in shaping the way people think about the workplace. Increased competition has encouraged employers to remove physical barriers in the work environment in hopes that greater physical connection will lead to improved collaboration.

These new open-plan offices brought with them criticism and debate on many fronts. Common critiques included noise, inability to focus, and lack of privacy. By 2018, headlines touting the death of the open office exploded on our news feeds, with authors piggy-backing on the results of a research article published by Ethan S. Bernstein and Stephen Turban funded by the Harvard Business School.

Critics were using snippets of the research findings to predict the end of this ‘trend’ in office design. As designers of workplace environments, we even had client’s employees bring printouts of such articles to interviews and workshops in a desperate plea for us to avoid the open office in our design proposals.

And just when it seemed that the dust was beginning to settle, COVID-19 has brought about a new wave of speculation about the death of the open office.

A close examination of the Bernstein and Turban study.

So, is the open office dead? To start, let’s review the Bernstein and Turban research study and look at a few common misconceptions we’ve discovered.

Since there wasn’t much data to support how the workplace could support collaboration, Bernstein and Turban decided to study how physical boundaries would affect interaction. To do this, the study tracked two organizations moving from cubicle-based environments into open spaces with few visual separations between people. Researchers used data from wearable devices and servers (emails, chat, etc) to track the interactions between individuals before and after. In both studies, face to face communication went down and virtual communication went up in the new, more open environments.

While it offers a lot of insight into human behavior, we’ve also seen misinterpretation and misrepresentation of the study and its conclusions.

Here are a few of the worst offenders:

Misinterpretation #1: Private offices are the right way to go.

It’s important to note that the new work environments assigned users to an entire floor that was “open, transparent and boundaryless” (study 1, 52 people) and “large rooms of desks and monitors and no dividers between people’s desks” (study 2, 100 people). For the sake of the study, the new environments were set up as an extreme version of open plan with no separation between people and only one type of workspace. Therefore, the results do not reflect how more visual separation (screens, walls, etc) or changes in the types of spaces would impact people’s ability to communicate more effectively.

Again, this is not a direct finding of the study. In fact, the second study did find an increase in face-to-face communication in the open plan.

While the study theorizes why people behaved the way they did based on perceived disruptions, it doesn’t specifically measure or report on noise levels.

Again, this wasn’t a specific focus of the study. We can assume that spaces with little to no visual separations will be distracting when it comes to focused work. However, this is not something the study set out to prove.

The open office is a business strategy, not a one-size-fits-all solution.

This leads us to question, is the open office really the wrong solution? Reviewing the original study, our team found support for our core beliefs when it comes to designing a office environment.

With these ideas in mind, our job is to design spaces that recognize the uniqueness of individuals and organizations. What works for one organization, may not work for another. Sometimes this is an open-plan environment, and we’ll plan a space that allows for the appropriate amount of connections between the right team members while also providing shelter and privacy for focus and experimentation. Other times, a more traditional or even private office-based space meets the organization’s needs, and we’ll focus on maximizing the function of individual areas while providing spaces to come together and connect with each other.

The type of workspace should be designed based on the type of work being performed, with insight gained from the organization’s priorities and strategic goals.

Three recent examples come to mind when thinking about the range of solutions when aligning an organization with the right workplace:

The head of a local manufacturer’s engineering department sought to make his staff more collaborative during their company’s move to a new facility. What he was finding was that his engineers were receiving very little cross-training. This was causing staff members to become very specialized and, as a result, they were having difficulty adjusting when change occurred. The group had been working in a largely private office environment where it was becoming too easy to ignore the issues that others were facing – while personal performance might be okay, there was not enough exposure to the ideas of others.

We helped the client develop a team-based workplace strategy in an open office configuration. The focus was on grouping engineers of similar product lines together according to their primary responsibility, which then often put senior and junior engineers close together. The new solution opened sightlines in order to create accountability between the staff, conference rooms became centralized and visible as the areas of collaboration, and less formal meeting spaces became a continuation of the regular workplace.  Whiteboards lined as many vertical surfaces as possible so that work is always on display, and alterative work zones created short-term areas of respite in order to provide some relief when one truly needed to work in isolation. 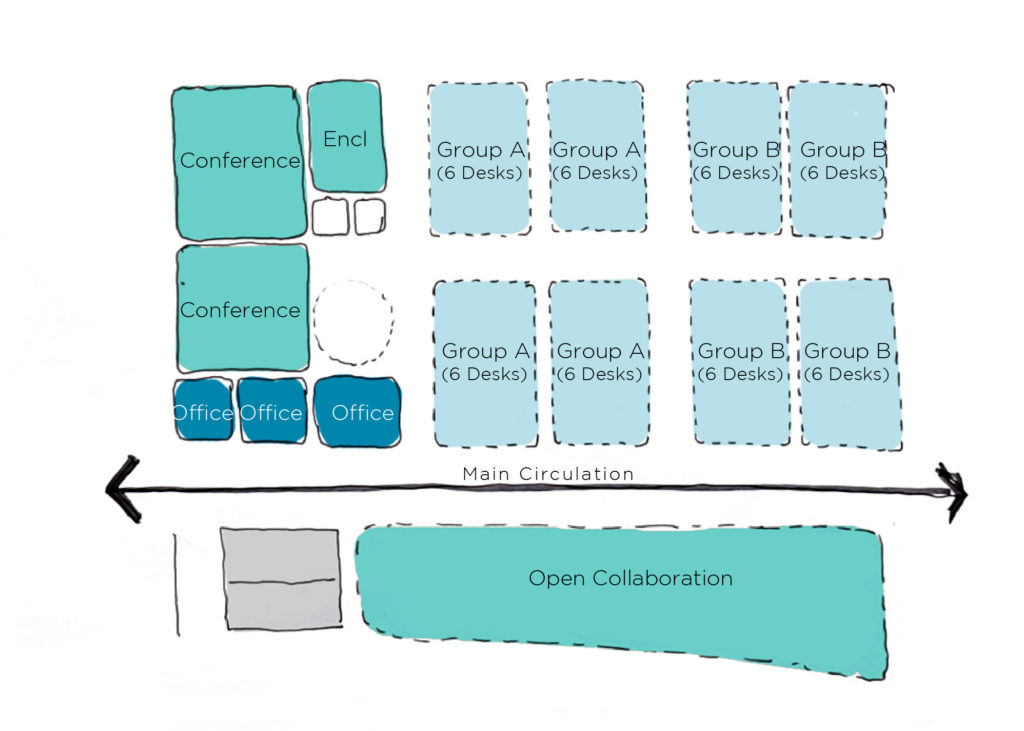 Truly agile workplaces are flexible, mobile, and in a continuous state of iteration and improvement. At a global product development and manufacturing corporation, we were challenged to apply the agile workplace concepts to a group of interdisciplinary teams that were focused around developing and delivering products to market. These teams included staff from traditionally separate departments: research and development, marketing, and project management. By bringing them together, the goal was to increase speed to market, reduce internal lag, and to foster a culture of innovation.

The design focused on work areas dedicated to the needs of a single squad, but which could be replicated within the given space constraints. Each workspace is organized into four zones based on the type of work.

The benefit of this work arrangement is that it provides a task-based team all their required workplace elements in one common location.  The goal is to reduce internal scheduled meetings and allow a team to take ownership of their environment. 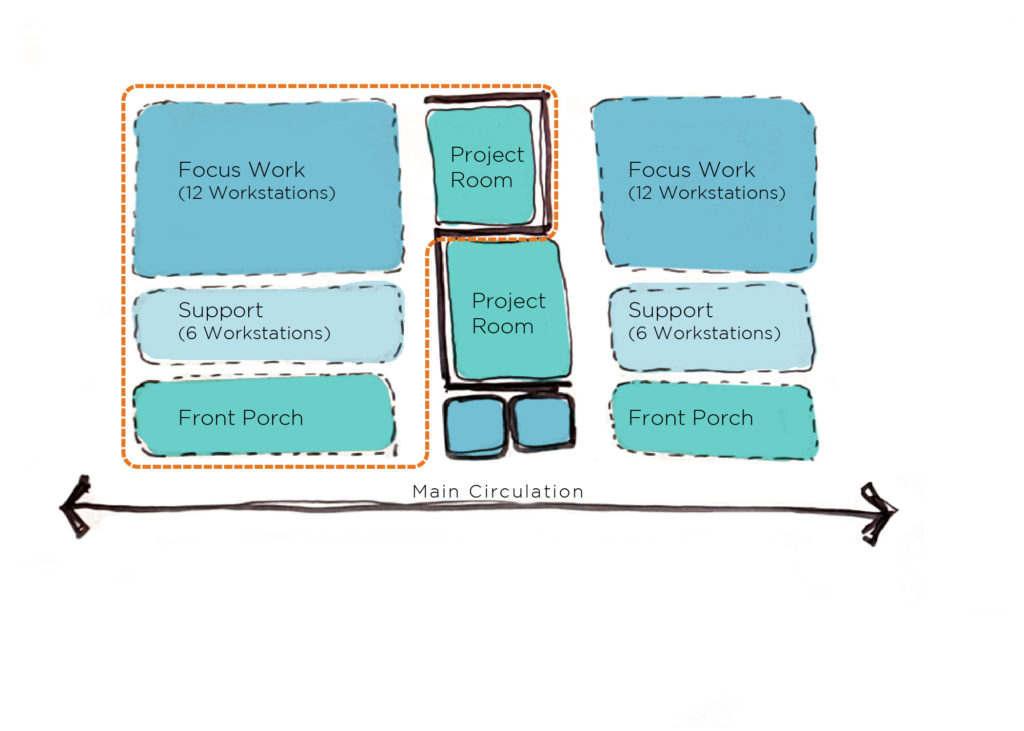 As the headquarters for a large advocacy group, our client sought to elevate their presence in the state capitol with the construction of new office and group meeting space. Through our discovery process, it became clear that their reward structure, market appeal, and culture of interaction were all based around a private office model. They viewed this model as a key to their future success and attracting the best talent. As it turns out, one of their largest competitors for talent is law offices using a similar office and reward structure.

Daily activities for employees mostly involved focused work and connecting with individuals outside of the organization, while internal collaboration occurred on a scheduled basis as opposed to informally throughout the day. With that said, it was still important to provide variety throughout the work environment with touchpoints, hospitality, and enclaves in order to support a strong internal culture and employee engagement. Individual offices, shared offices, and smaller office suites were deployed to support the varied needs and styles of each workgroup. 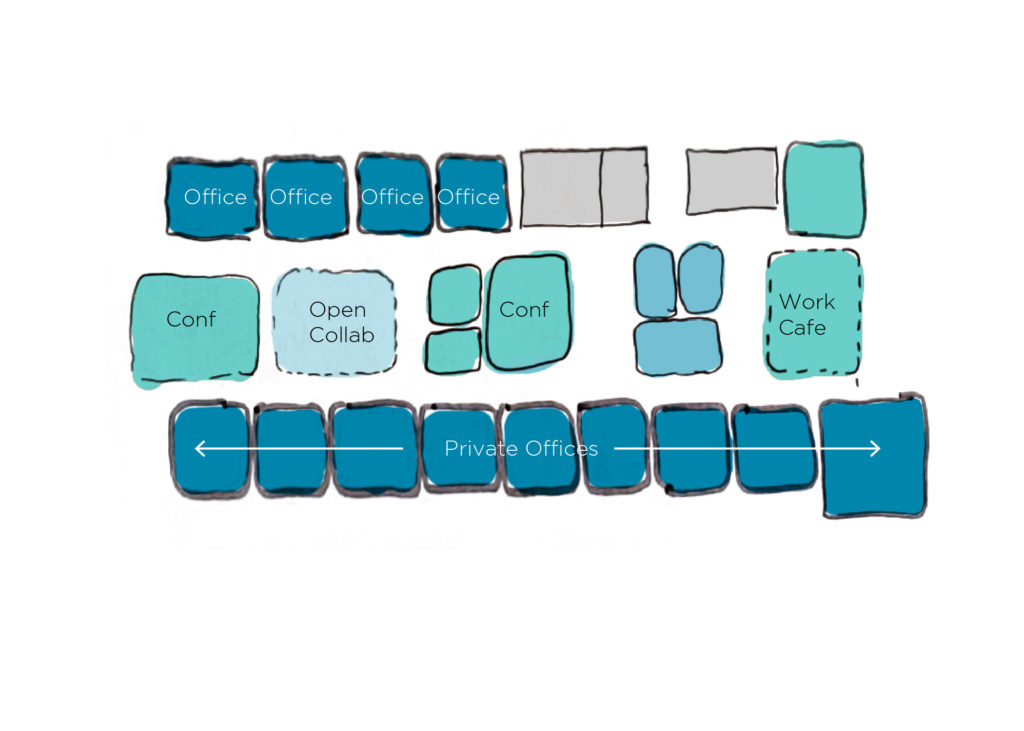 We don’t know what the future holds but don’t count out the open office.

As we look to the future of work environments and potential changes or disruptions that may occur based on the COVID-19 pandemic, one thing holds true: successful workspaces must be designed with the end-users and unique organizational requirements in mind. However, the workspace of the future might be shifted to mitigate disease transmission and respond to health and wellbeing requirements, we know that a variety of design solutions will remain necessary to support the diversity of personal and organizational needs present in any region or market.

A collection of 10,000 photographs from the Advance Publications national roll-out.

At the first sign of illness, most people will head to their primary care doctor or the nearest urgent care […]